Vita Coco contacted me a little while ago & asked if I would be kind enough to review their Coconut Oil. Of course I said yes, those of you that know me well know how much I love all things Coconut. Plus I use coconut oil for pretty much anything! I was at the BBC Good Food Show this weekend & in the farewell goodie bag there was also a carton of Vita Coco Coconut Water. So I thought I would add this to the review.

Now you may think Coconut Products are new & all very exciting, however it’s been around for years, in fact for Vita Coco it’s been ten years…

Shortly after that night, Ira hopped on a plane to Brazil to see one of the girls and learned that the coconut water hype was real. When Mike came to visit a few months later, they got down to business with a plan to bring coconut water to the US.

When I think of Vita Coco I first think of their water, so let’s start with that. I love Coconut Water, no surprise there. Whenever I do a big run, the first thing I drink is a nice cool carton of Coconut Water. Vita Coco has more than 15 times the electrolytes found in sports drinks & unlike Lucazade & other sports drink it’s Natural & Vegan. Coconut is the most hydrating thing you can drink & it’s packed full of the good stuff.

However if running & exercising isn’t your thing, you can still drink this natural yummy stuff. It’s all about putting good, natural things into your body.

What I like about Vita Coco is that it isn’t grossly sweet like other Coconut Waters, when it’s ice cold it leaves you feeling so refreshed. It’s cholestrolfree, has more potassium than four bananas, it contains Vitamin C & it’s only 18 Calories per 100ml.

Coconut is the biggest thing of 2016, especially Coconut Oil. Why? Well it claims to do everything!

When it comes to cooking Vita Coco is a great Coconut Oil, it doesn’t taste overly Coconutty, so when you’re cooking something that has a sauce the coconut taste doesn’t overpower it. However, if you are frying off some Mushrooms to add to your Sunday Morning fry up I suggest you use your normal oil. Unless you’re like me & you love a light tropical twist to your fry up. In my opinion it’s great.

Coconut Oil is packed full of goodies; Choline, Vitamin E, Vitamin K, Iron, Stearic and Lauric Acid. All the things the body needs to be fit & healthy. I use it instead of normal oils, in all of my cooking, I often use it on my toast instead of butter, I have baked yummy brownies, pancakes & waffles. It’s a super oil. Vita Coco Oil is Organic & Cold Pressed to meaning it’s a great quality product. However this slightly sweet & nutty oil isn’t just great for cooking. It’s body benefits are endless.

I cake my hair in Coconut Oil once a week, because I dye my hair it’s very dry. But smothering it in Coconut Oil once a week before I wash it keeps it shiny & fresh. I use it on my skin, mainly on my cellulite, which helps reduce the marks. Whenever I burn myself cooking (which is a lot) I cover the burn in oil, which reduces the pain & stops it from drying out. Also a couple of months ago my hair dye burnt my scalp & it blistered. It was super gross. My hairdresser said that it would last for at least a month, however lightly rubbing my scalp in Coconut Oil meant I only had blisters for 2 weeks. Of course there is also teeth pulling, I put a spoonful of Coconut Oil in my mouth a couple of times a week, swish it around like mouthwash for about 15 minutes then spit it down the toilet. It helps clean your teeth, leaving them whiter, an old Asian wives tail that does the job. 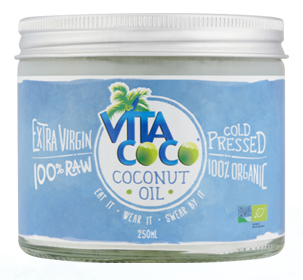 What I am trying to say is Vita Coco is a great product. Both their Water & their Oil.